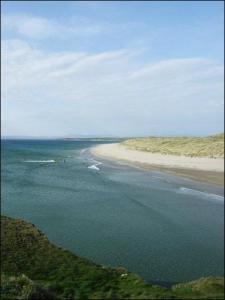 Tullan strand was where I had my first surf back in 2008. It’s an exposed beach which picks up alot of swell from most directions so there’s usually a wave here. You’ll find all levels of surfers there from beginners to pros and the waves can vary from a few feet to massive waves a few metres high… which can be scary!

This isnt my favourite beach to surf but it’s where I had my first lesson so I kinda have a  relationship with it. I guess it ranks low on my list because back in December 2009 I drifted out  pretty far and a huge swell came in… basically I was caught in the crash zone with waves of about 10 foot dumping on me…  as soon as one had finished with me another was lining up to have a go. I was lucky to get back to shore! They were perfect for more experienced surfers but out of my league.
If you havnt been before watch out for the surf schools – they use this beach a good bit and alot of the time with beginners on their first outing. The beach can bring in some massive swells so you could be riding some narley waves or get caught in the wrong place like what happened to me… oh and watch the cross wave boncing off the cliffs this is pretty dodgy with a steep drop!
Tullan is offshore in east and southeast winds so if you catch the conditions right with a good wave period you could end up with a great surf.