After having a great weekend in Achill on the June Bank Holiday in 2008 we decided to test our luck and see if we could get another sun soaked weekend one year on… I guess someone was praying for us; you can see from the photos it was a scorcher!

As a lot of us know the good weather in Ireland means its Summer time and the waves are not as plentyful. We had a couple of sessions in the water over the weekend with only one of the days bringing in a decent swell. 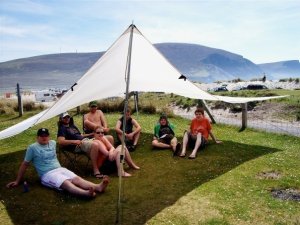 The temperatures were in the mid 20’s and the water was nearly tropical! the Winter wetsuit was needing regular flushouts.

We stayed at Keel Sandybanks at Keel Beach.It got so hot during the days that getting in a sneaky nap in the tent was out of the question. We had a good crew with us on this trip about 5 tents which allowed us to get a nice section of the campsite to ourselves.

I was only surfing just over a year at this stage but I knew I was falling for Achill Island as a destination for a surf trip.

Many a beer was had when the sun went down around the campsite and we ventured up to the Annexe to sample the local nightlife closer to the witching hour.

Keem Bay was like a scene from the movie ‘The Beach’ the water was near tropical looking and there was even a sighting of one of ‘the men in grey suits’… pretty sure it was only a Basking shark though!

Lets hope we can get a three in a row this June Bank Holiday!

Lives Of The Artists