So last weekend was another great weekend away with the gang – The June Bank Holiday weekend has become an annual date for our surf/camping trip to Achill Island and we’re just back from our third year in a row… it was up there with the best! 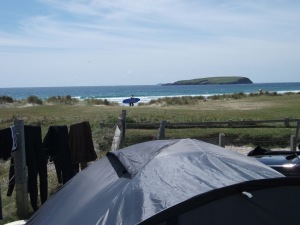 I was checking the swell all week with one eye on the weather forecast as well (camping in the rain is no fun!) The swell forecast constantly changed all week but there was always something hitting Achill. The conditions on windguru for the weekend ranged from a swell between 2 metres on Saturday to 1.1 metre on Monday. As for the weather, well it was forecast to be a mixed bag so we were counting on the micro climate of Achill Island for a third year in a row of sunny weather like back in 2008 & 2009… we were’nt disappointed!

We set up camp on the Saturday at Keel Sanybanks again and with about 9 of us and 5 tents we got a nice little circle going – sweet for the cooking and beer sessions without people trampling through your area!

As soon as we set up camp the wetsuits were on, we hopped the fence to the beach and set out for a 2 hour session in the water. The beach was busy enough with swimmers and surfers and the local surf school was out but Keel is big enough for everybody when there is a decent swell coming in. Saturday had good sized waves coming in around the 6 foot size with smaller 2 – 3 footers ones rolling in as well.

Sunday was an absolute scorcher and the sun cream was definitely needed! We got two sessions in over the day… close to 5 hours in the water. It was a wicked session… the waves were rolling in constantly apart from a brief slump and it was proper fun – catching about 3 footers nicely and getting straight back out for more!

Beers were had, the camping stove was on none stop and the craic was great… when you have waves rolling in, sunny weather and a good group around you sharing food, beer and stories there’s no better place to be!

Sorry about the dearth of photos but I was just enjoying myself and relaxing too much to get the camera out to the waves!