It’s been all over the Irish media in recent days and making headlines across the surfing community in Europe; the proposed pier at Doolin, Co. Clare could potentially destroy two top waves. Crab Island and Doolin Point are known as being among the top waves in the Country and the current design of the proposed pier may have a major impact on their future.

Clare County Council have made an application for the new pier and this will be voted on by the sitting Councillors in Clare. Basicially the council will decide their own application themselves!

The pier as currently proposed may have a number of negative impacts such as:

The photos below were taken by Paudie Scanlon and shows what great waves are at stake! 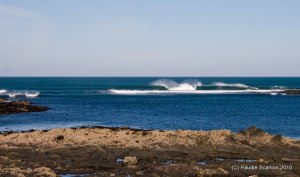 The West Coast Surf Club are putting together a document to submit to the County Council and are doing trojan work behind the scenes to have the pier design altered.

Check out the online petition and show your support for a re-design of the pier.

A new pier has to be constructed and all the surfers acknowledge this, however there are alternative locations and designs which would be more suitable and would have no impact on the waves. The surfing community is not against the principle of a new pier but a redesign could provide a suitable solution for all.

The details of the planning application can be seen on the Clare County Council website here. Anyone can make a submission and its free, so get the pen out and send your thoughts on the proposal to Clare County Council before August 13th 2010, the more support the better!

Check out the video below, some great waves caught at these surf spots… Don’t let them be destroyed! I havn’t surfed here yet… it’s slightly above my level but I want the opportunity to catch a few in a year or two!