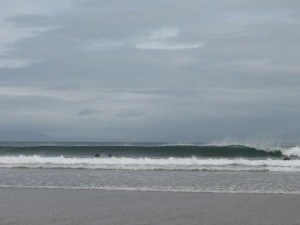 It was on the lips of nearly every surfer all week long- the larger than normal summer swell coming in from the West. WindGuru had it charted at around 4.4 metres high. We kept an eye on the winds all week… they were predominately from the south west.

With such a large swell and southwesterly winds there was only one location for us… Streedagh but when we arrived yesterday at the beach it seemed every other surfer in the Country had the same idea! There was 3 surf schools there and a serious amount of beginners… with close to 200 surfers in the water!

The conditions were great… waves came in at the 3 to 4 foot range the majority of the time but things changed now and then and a few bigger ones around the 5 – 6 foot range rolled in! The cross/offshore winds held up the waves nicely. 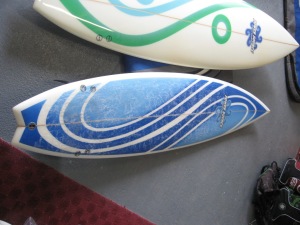 Myself, Colin and Mark had a good 2 – 2.5 hour session and a few nice waves were caught. Got pounded by a couple of the bigger ones though!

Having decided to upgrade boards Colin and Myself ventured to Mark McGuire’s workshop (Powersource Surfboards). Checked out a few boards and got a couple of good ideas on what type and size of board to get… so many little things to think about. Mark was very helpful and we’re heading back soon to test drive a couple of boards.