With the new board in tow I set out with Niall for Spanish Point… there was a swell rolling in but it was far from perfect!

The wind and wave period were ridiculous… a pure on-shore of about 23km/h, a wave period of about 7 seconds and a 1.9 metre swell meant the waves were messy and inconsistent.

We still got a 2 hour session in and paddled for whatever we could but I’m longing for the Autumn swells to get a good session under my belt on the new board.

A couple of guys in the water didn’t make the day any better, surf etiquette was certainly out the window for them!… between the snaking and wave hogging they really got on our nerves. One guy in particular who was on a pretty short board (about 6 foot) was the main culprit… he was a pretty decent surfer and knew exactly what he was doing.

I’m not saying I never get in anyones way or make a mistake while out in the water but I strive not to and when I do I try to apologise where I can. It’s inevitable that people will get it wrong but to continuously and intentially go against surf etiquette is just not cool. 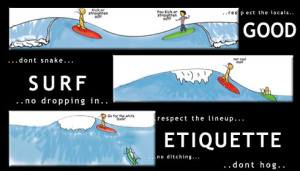 Mickey Smith: ‘Dark Side of the Lens’