I came across an interesting article in the Sunday Times a few days ago documenting the change global warming is having on our waves. The article focuses on the change in our climate and mainly holds global warming accountable for these sudden alterations.

I on the other hand believe that, yes, our climate is heating up and sea levels are rising but this cannot be totally down to “Global Warming”, this world goes through cycles and this might just be another such cycle – it’s just now in current times we are scientifically minded and every detail of change has to be explained and reasoned. So back to the article then…

“Extreme surfers use helicopters, Jet Skis and the Polynesian art of wayfinding to reach the world’s biggest waves. Yet geologists believe these giant swells are getting higher all the time, and that sea levels pose a devastating threat to shipping and the world’s largest cities. Good news for surfers – bad news for the planet“ 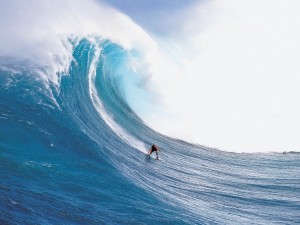 The article gives an insight into the big wave surfing of guys such as Laird Hamilton (one of the first guys to try tow-in surfing) documenting the risks and thrills associated with such a pass time. But beyond this fun side of big waves hitting our shore line there’s a bigger picture.

Astounding facts grab your attention; “The biggest wave ever recorded hit Alaska in 1958, when a Tsunami peaked at 500 metres above sea level, over twice as high as the tallest building in Britain.”

This is hard to imagine, I was up in the docklands (Dublin) reading this article and even the new buildings there were minuscule compared to this wave. The experts are of the opinion that the waves we see or hear about today are only going to get bigger and more common, and a lot of this is due to global warming.

“Everything in the oceans seems to be rising: wave heights, sea levels, surface temperatures, wind speeds, storm intensities, coastal surges, tsunami risks.” Who knows when the coastal cities become vulnerable to more than the odd flooding, nine out of ten of the world’s largest cities are located on low-lying coastal land! 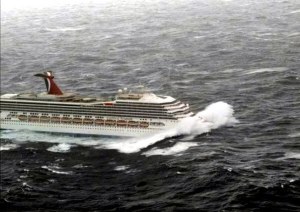 One mind boggling piece in the article is that “it’s not only on land that higher seas and bigger waves pose a threat.” Over the past 10 years around 100 ships carrying a cargo capacity of about 500 gross tons have been damaged beyond repair or lost at sea!

“For centuries, sailors told of the existence of monstrous waves up to 100ft high that could appear without warning in mid-ocean, against the prevailing current and wave direction and often in perfect clear weather. Such waves were said to consist of an almost vertical wall of water preceded by a trough so deep that it was referred to as a ‘hole in the sea.'”

We (surfers) can relate to this to a certain extent; as waves push in, the the water sucks up the face to leave a shallow “hole” in front; scary to get caught in when a big wave is ready to land on you!

These myths were never fully believed by “experts” until 1995 when at an oil platform in the North Sea 100 miles off the coast of Norway an 84 foot wave hit. This was in the middle of the sea, far away from any reef or sand bar. There have since been reports of ships been hit by waves of up to 100 foot in the open sea.

The shift in the experts thinking is now from figuring out if these waves were possible to establishing why they occur. What is being learned now is that we don’t have the technology or understanding to determine why “a certain kind of freak wave, three or four times taller than its surrounding seas” can occur without any obvious cause.

An interesting fact for surfers on the Emerald Isle is that “off northwestern Scotland, between the 1960’s and the 1990’s, the size of waves increased by an incredible 50%.” There are no definitive answers for this… it just happened.

Who knows what size waves some of the legends such as Laird Hamilton or our very own Fergal Smith will be riding in years to come, an interesting thought which may have equal significance for people living by the coast!

An interesting follow on read might be ‘The Wave: In Pursuit of the Rogues, Freaks and Giants of the Ocean‘.