Without a surf in a couple of weeks I set out yesterday to the West Coast to put that right. With a north westerly swell and a southerly wind I had Streedagh in mind but the beach had other ideas, there wasn’t a surfable wave… it got to about a foot in height but it crashed on very shallow water.

So a quick phone call to Bundoran Surf Co. let us know that there were waves up at Tullan but slightly messy. We hopped into the cars and set out for Bundoran to find a seriously messy Tullan Strand and it wasn’t a pretty sight. 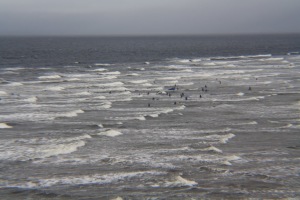 Ciaran had come from Sligo and checked out Strandhill on his way… it wasn’t great but a lot better and less messy than Tullan. So back in the cars again and down the road to Strandhill (The Environmentalists will be loving us with all the driving we did!).

Strandhill was pretty quiet with about 10 surfers out in front of the rocks and some beginners and a surf school further down the beach.

Itching for a surf we jumped straight in hoping for something! Waves were coming in but the period wasn’t great and the wind had turned onshore. It was only my third outing on the new board but I caught a few waves; one in particular which was clean enough (they were few and far between with the conditions), about 2 foot and I got down along the face for a short ride.

It may not have been the best of surf sessions but it was great to get out in the water and back with the gang surfing again; we hadn’t been out together in a couple of months.

On the road to Lahinch next weekend and the windguru conditions are looking promising with a decent swell, big wave periods and offshore wind… lets hope it doesn’t change!