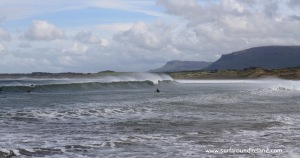 Southerly winds were around on Saturday and this meant a lot of top surf spots were working, with the Nationals at Easkey getting great conditions… we traveled further north and landed at Streedagh for 2 days of testing surf!

The swell that came in at the weekend ranged from 4 – 5 metres and a decent wave period gave us many a good wave on the north west coast.

Although Streedagh was dumping a lot over the weekend we did get a plenty of good waves each day.

The water is still pretty warm these days so we got about 2 hours in the water both days.

What a difference a week makes, last weekend down at Lahinch I was catching nicely sized waves and getting clean rides down the line but on Saturday I was popping up and dropping in on waves a good bit bigger and steeper, but couldn’t hold it at the bottom… just need to combine the two for the complete package… practice, practice and more practice!

Colin and Ciaran left the water on Saturday with some nice waves in the memory bank.

On Sunday Colin caught a sweet right hander, I was out back and was sure he had been wiped out; there was no sign of him soon after the pop up but reappeared further down the line; he say’s he was so hunkered down that his arse was near touching the water!

I was slightly frustrated on Sunday with loads of waves passing me by and only catching a few of note but the last one was sweet and John was at the beach looking out when I caught it… he said he could see the big grin on my face as I dropped in and swept to the right… finished on a high! 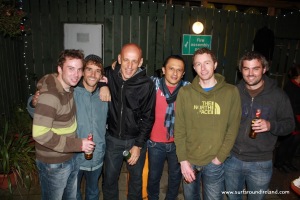 We were up in the Bundoran Surf Co. for Saturday night; they had a charity bbq/party. Hats off to the guys the food was top notch and the craic mighty.

€400 raised on the night and Bundoran Surf Co. doubled this with a cheque for €800 going to concern!

Ended up chatting to a guy from Mundaka in Spain, he was over for 2 weeks, sleeping in his Fiat Punto and surfing every day! What a trip and he’s arrived to excellent conditions!

Saturday evening we stopped off at the Peak; it was going off with great waves rolling in around the 10 foot range. A few good surfers out and we managed to catch a couple of nice shots. 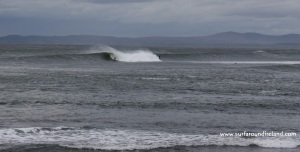