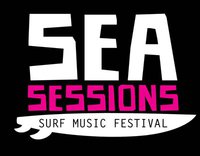 Bundoran 9th Feb 2011 – The Sea Sessions organisers attended the Irish Festival Awards in Dublin’s Sugar Club on Wednesday night with no less than six award nominations for their festival to look forward to. After an evening filled with some nail-biting moments, the North West team walked away ecstatic after scooping the award for ‘Best Small Festival’. Building on the successes of the last three years, Ireland’s premier Surf & Music festival Sea Sessions, is once again lining up to be one of the hottest festivals of the Summer, with established and up-and-coming acts taking to the stage in Bundoran, Co.Donegal between 24th-26th June. The three-day festival has become a major tourism generator for the region.
The who’s who of the Irish festival scene gathered in Dublin’s Sugar Club for the Irish Festival Awards.
Anxiety turned to excitement as the nominees for the ‘Best Small Festival’ category were read-out, turning quickly to jubilation as Sea Sessions was announced as the winner. The team bounded out of their seats to go up and collect the award, almost knocking their drinks over in the melee!
Declan Madden, one of the festivals organisers and owner of the ever popular Bundoran bar ‘The Bridge’, stepped up to accept the award. Declan said in his acceptance speech:
“A massive thank you to all who have supported the festival over the past three years, and a huge thanks to those who voted for us. This award is recognition of the great support the event gets from the people of Bundoran. Sea Sessions is all about celebrating the beach and showcasing what we have here in the North West; great surf, jaw-dropping scenery, and a laid back way of life. We want to make sure that everyone, from people who attend the event, to the local authority, see the fantastic natural amenity that is our coastline and do everything they can to  protect it from harm” . 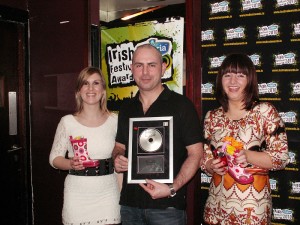 Declan went on to finish his acceptance speech with:
“Sea Sessions has a truly unique atmosphere. The crowd that come to it are lovely, lovely people and there is never any hassle, it’s very chilled and the local people really look forward to it. Go raibh maith agaibh!”.
Sea Sessions gives a significant boost to local businesses in the town, and this award will be brought home with a huge sense of pride. Daniel Browne, also a Sea Sessions organiser, goes on to explain the importance of the festival at a local level:
“The people and businesses of Bundoran have seen the tourism value of Sea Sessions and make sure to offer a great experience to the people coming to the town, which means festival goers leave with a great impression of the area, which is what it’s all about”.

Tracy Ferguson, Bundoran town council tourism officer, congratulated the festivals organisers Peter Craig, Daniel Browne and Declan Madden on the big win and said:
“Bundoran knows that Sea Sessions is a professionally run and brilliant festival. An award of any kind just copper-fastens that reputation and adds validity. It gives me the chance to promote Bundoran as a small town that punches far beyond its weight when it comes to the memories and enjoyment that people have when they visit here. From my point of view, promoting tourism in Bundoran comes down to promoting employment, and anything that adds to my chances of success in that area is all good”.
The festival team would like to add that the accommodation in the town and surrounding areas is booking up quickly, however Bundoran accommodates 12,000 people, so there are still a range of options on offer; from great value weekend festival camping at €20 a ticket, to apartments, hotels, B&B’s and hostels.
Tracy Ferguson, Bundoran town council tourism officer goes on to say: 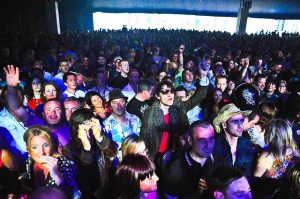 “Bundoran has witnessed the building success of Sea Sessions since its inception in 2008. The weekend is a definite sell-out for the town with businesses packed to the rafters with a happy and pleasant crowd. It has given us something to celebrate and the profile of Sea Sessions is a complete fit with Bundoran’s new visibility as a surfing, outdoor and party destination”.
Sea Sessions takes place in Bundoran from 24th-26th June. Tickets to the 3-day festival are available from http://www.seasessions.com/ or from HMV outlets nationwide. Weekend tickets can be bought for the same great price as last year (approx.€80).
Articles Food For Thought & Surfing News Surfing News

Calm After The Storm