Fresh from his North American tour, five-time Grammy award winner Ziggy Marley will share his musical love and samples from his fourth solo release “Wild and Free” (2011 Tuff Gong Worldwide) with festival goers at this year’s event before embarking on a European Tour. Marley’s career began as a family affair 30 years ago.

No strangers to a live audience, multi-platinum selling, chart topping alt-rockers BellX1 will take to the main stage and captivate onlookers with hits from their brand new album “Bloodless Coup”. Smash airplay singles from 2003’s “Music in Mouth” and 2005’s #1 Pop Chart album “Flock” are certain to gage audiences, played against the backdrop of the Atlantic Ocean!

To coincide with the release of the band’s third LP “Rolling Blackouts”, multi-instrumentalist indie-rocking-sextet The Go! Team will bring their legendary live show to the festival playing a raucous set of rock, funk, soul, hip-hop with trumpets, chants, a harmonica, glockenspiel, two drum kits and even a type-writer! Definitely a spectacle not to be missed!

Southampton quartet The Delays will be immersing themselves in local culture having also confirmed a live performance at Donegal’s award winning Sea Sessions Surf and Music Festival. The Delay’s curious career that has seen them go from the indie romanticism of ‘Nearer Than Heaven’, through the psychedelic disco rush of ‘Valentine’, to the all-out pop anthemics of ‘Hooray’ with all the unrestrained playfulness of kids on a sugar kick. Stick around – we think you’ll like them! 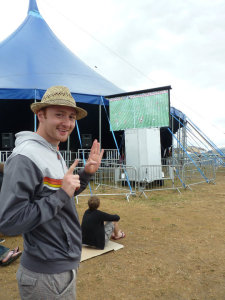 Dont forget Surf history will be made in Bundoran when the Donegal festival hosts the UK and Irelands first ever Association of Surfing Professionals (ASP) speciality event, along with many more activities.

The pic to the right is of Martin enjoying England getting beat by Germany on the big screen at Seasessions last year, 4 – 1 at that stage, not sure if that was the final score.

I’ve been to the festival twice and it is growing every year – defo one to pencil in festival diary this year.

Once in a Lifetime Wave Arrives at Lahinch Beach