A quick trip to Lahinch on Satruday for the Emerald Surf Party was a top decision. A gentle swell was rolling in, the sun was splitting the stones and the atmosphere around the town was electric.

The tide was pushing in on main beach and the small wave was just peaking close to the rocks – 20 mins in the water we made to call to hop in the car (wetsuits and all) and drive down the coast to find bigger waves with Doogie in mind. Passing by Spanish Pt. we saw nice sets coming in and with the scorching sun beaming into the car we pulled straight up and into the water. 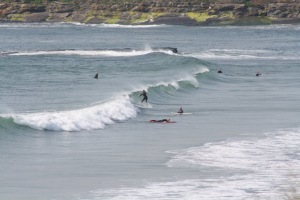 Saturday night the party was in O’Looneys surf bar, the whole surfing community in the area gathered to celebrate a great Irish Surf Business opening their new shop in Lahinch – Emerald Surfwear threw a great bash that went on till very late that night!

Defo a night to remember; we met and partyed with so many sound people – even some of the top surfers in the country and at the end of the day they’re just normal folk like the rest of us who get stoked on sun, waves and parties…

ART BY EOIN I Got Barrelled For A Week!