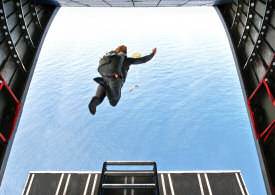 A few months back we saw Mark Visser surfing Jaws at night time. His next feat in his crazy run of projects is ‘Operation Deep Blue’ which follows Visser and researchers from the International Aerospace Centre as they discover massive waves located thousands of miles from land. These ‘freak’ waves are only being explored and researched in recent years, passed off as being myths when capains of ocean-liners spoke of their existence.

The waves Mark hunts are the very ones I read about in an article months ago: Tides are Turning Sunday Times Article. I’m actually reading an intersting book that investigates these waves and the men who venture out in search of some of the biggest surfing waves in the world: ‘The Wave: In Pursuit of the Rogues, Freaks and Giants of the Ocean.

The clip below gives a sneak peak and interview with Mark as he launches this new project. In order to get to the waves in time, both Mark and his crew (including his jet skis strapped tightly with his surf boards and equipment) are dropped from the air into outer sea locations that are too remote for seaplane and helicopters. The feature length clip should be interesting!

A Few Snaps From May