SURF’S UP this March on the North Coast with the annual Circle One Portrush Open Surfing Championships. The Causeway Coast Surf Club (CCSC), in association with Coleraine Borough Council, and the Irish Surfing Association (ISA), will be staging this year’s eagerly anticipated event on the Saturday 10th and Sunday 11th March 2012 at the West Strand in Portrush.
Contest organisers are expecting the best male and female surfers in Ireland to take part in the two days of competition.   This year’s event is also the first leg of the Irish Surf Tour 2012.   As well as the two days of competition, a full schedule of weekend entertainment is planned for people of all ages.  The Circle One Portrush Open surf contest weekend really is going to bring that “Beach Boys” feeling to the town. 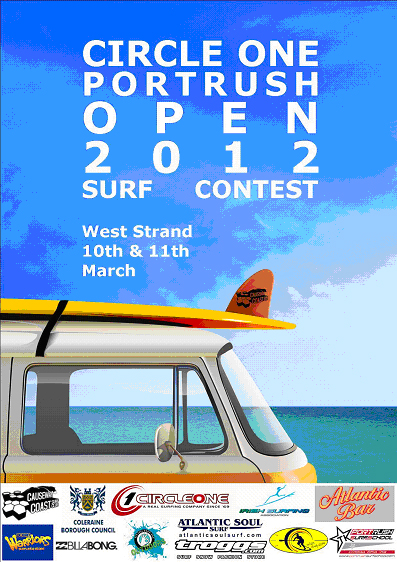