The President of Ireland is making a name for himself getting involved in the surf community both at home and abroad. Only back July of this year Mr. Higgins visited Sea Sessions surf and music festival in Bundoran.

Within recent days the President visited a surf reserve in Spain after choosing to spend his holidays at Ribamontan al Mar (Somo and Loredo). Higgins and his wife have been attending Spanish courses in the run up to his forthcoming State visits to South America. While taking a break from the Spanish lessons he visited the central piece in Ribamontán’s competitive tourism plan focused on and around the sport of surfing. 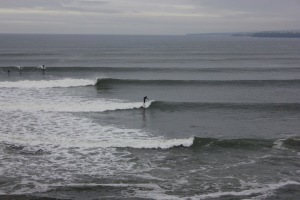 President Higgins was shown all relevant information associated with this impressive local project that has produced the first ever surf related nature reserve in Europe. According to reports President Higgins is intent on replicating such a project in Ireland. May I suggest he begin with the threatened wave at Crab Island!

President Higgins is reported to have said that he “had already heard of the charms of Loredo and Somo. There are many Irishmen flying to Cantabria in search of sun and also waves to get the chance to surf“. It’s great to see our president take such an interest in surfing and indeed in protecting special surf spots.

Maybe we should follow this up with him on his return to Ireland?!!