Looking forward to Ireland’s first ever surf film and art festival celebrating surfing and surf culture from around the world. Shore Shots is a member of the Global Surf Film Festival Collective (GSFFC.org)

A two-day tribute to the sea featuring big-screen cinema releases, awe-inspiring photography and spectacular short films from the four corners of the earth.

It’s a chance to catch up, enjoy the show and share the stoke with surfers from across Ireland.
They’ve  got all the latest footage from the global surf scene, award-winning movies and tales of travel and adventure from men and women who have devoted their lives to exploring and sharing the water around us.

There’ll be full-length surf films in glorious cinema definition, short films from around the country and a well-stocked bar to keep you make sure you don’t get thirsty looking at all those barrels.

There’ll be music downstairs, good times and a truly impressive surf photography exhibition featuring award winning work by George Karbus as well as surf photos by Christian McLeod (whose work is featured on the Shoreshots website), David Olsthoorn and many others. 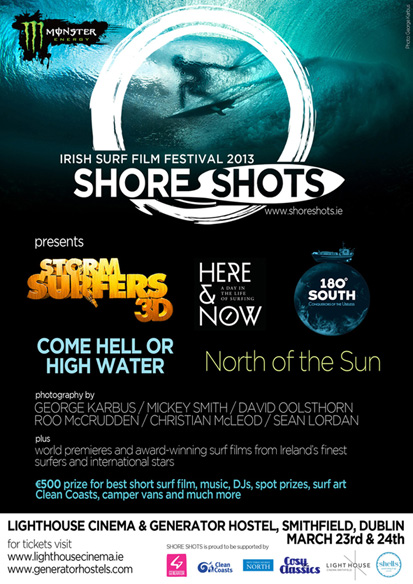 Irish Surfing at its Best