I hooked up with Irish surfer Ollie O Flaherty at some of his local breaks a few weeks back. Ollie is well known for his exploits in the Irish Big wave surfing scene and just a few years ago was shortlisted for the biggest wave award at the Billabong XXL Awards in California.

Ollie and his band of brothers charge as hard, if not harder than any big wave surfers in Europe but most of the time Ollie is a regular guy surfing regular waves at his hometown in Lahinch, Co. Clare. He also has a full time job as a surf instructor with Ben’s Surf Clinic, also in Lahinch.

As with all dedicated surfers Ollie arranged to meet me at first light at one of the reef’s close to Lahinch where Ollie let his surfing do most of the talking. We caught up again later and talked some big wave stuff, training regimes, local surfing in Ireland and the future… 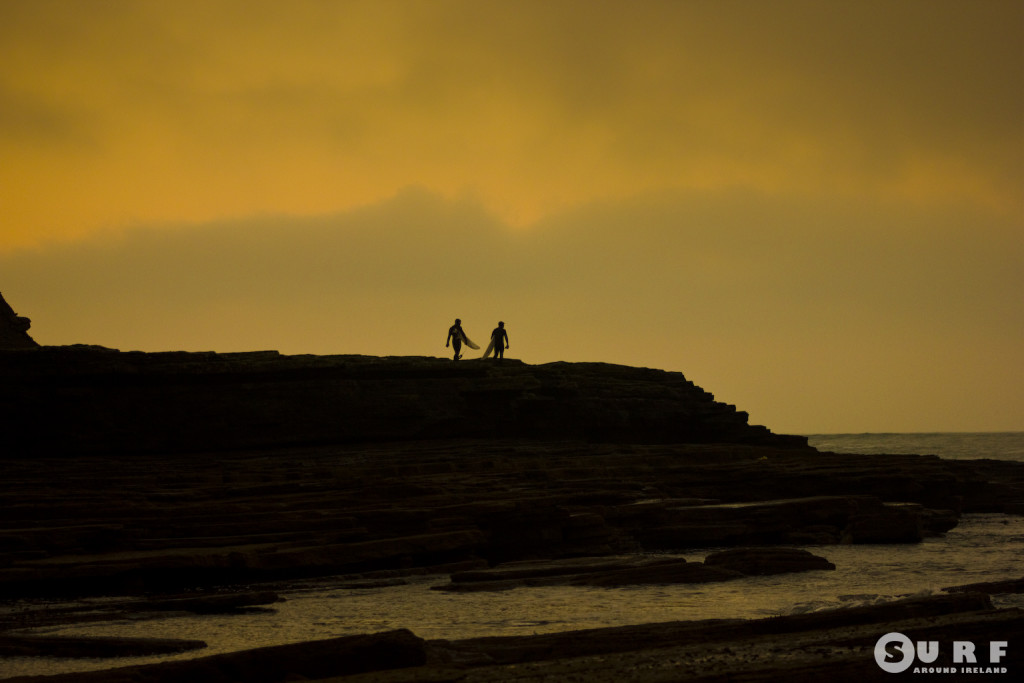 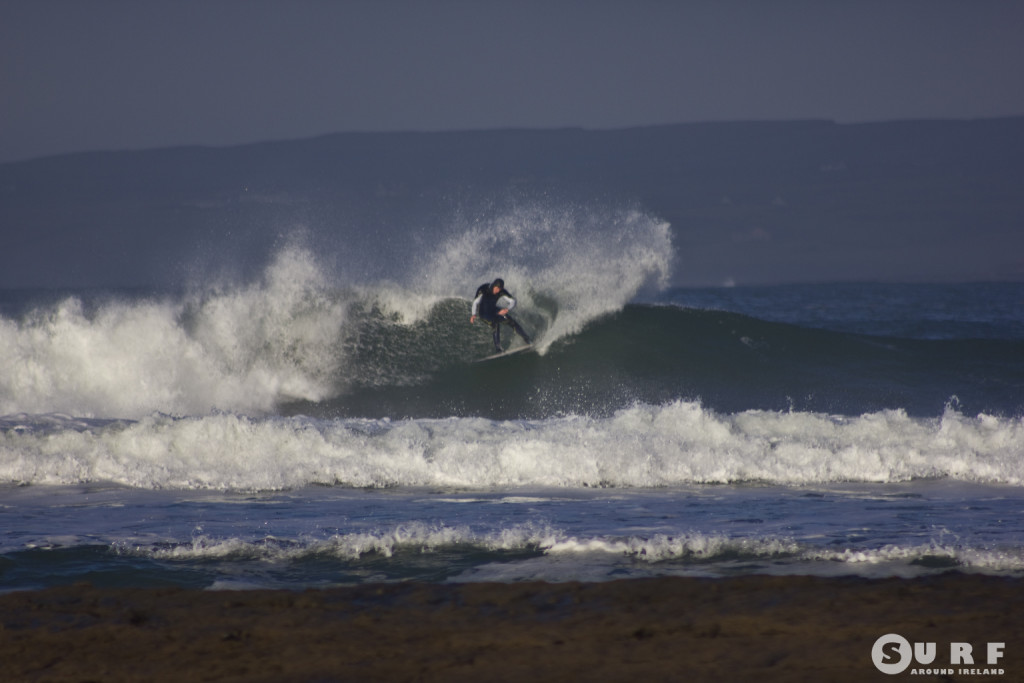 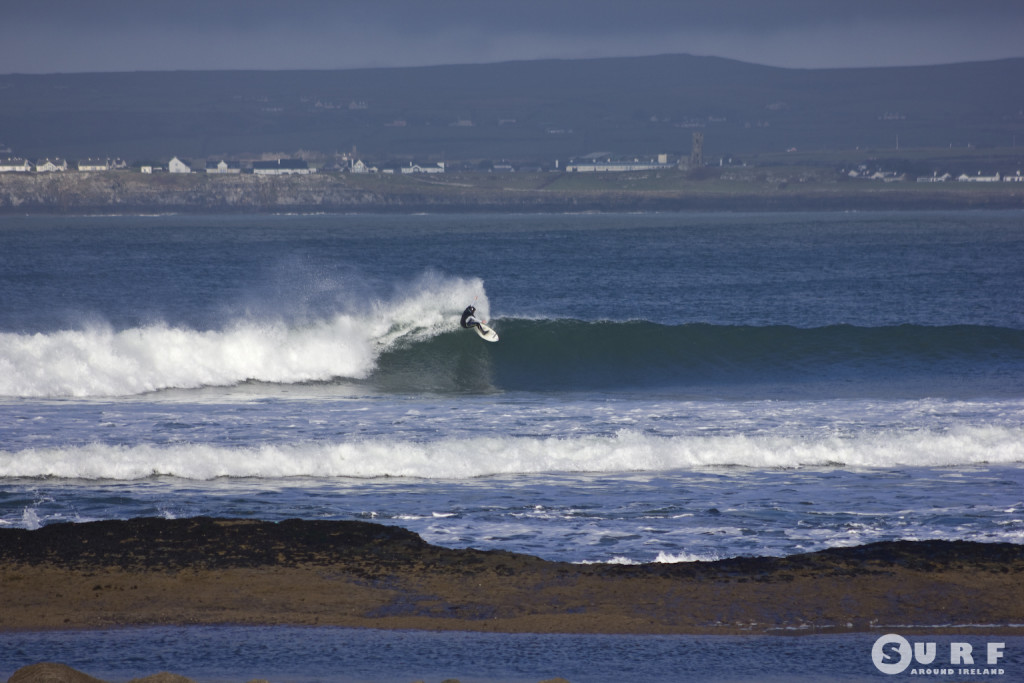 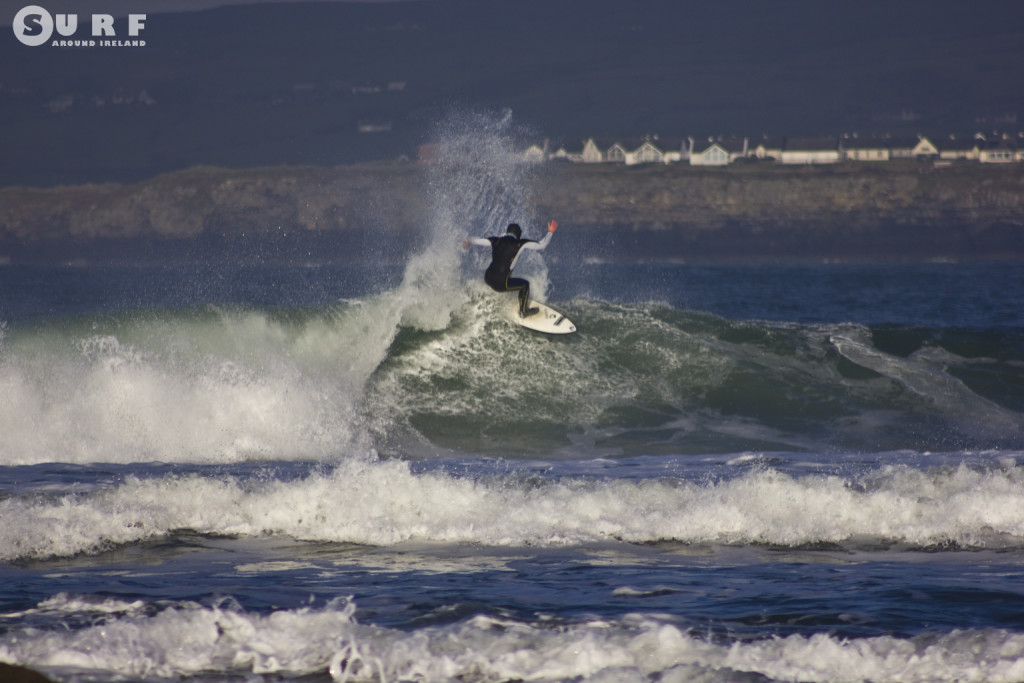 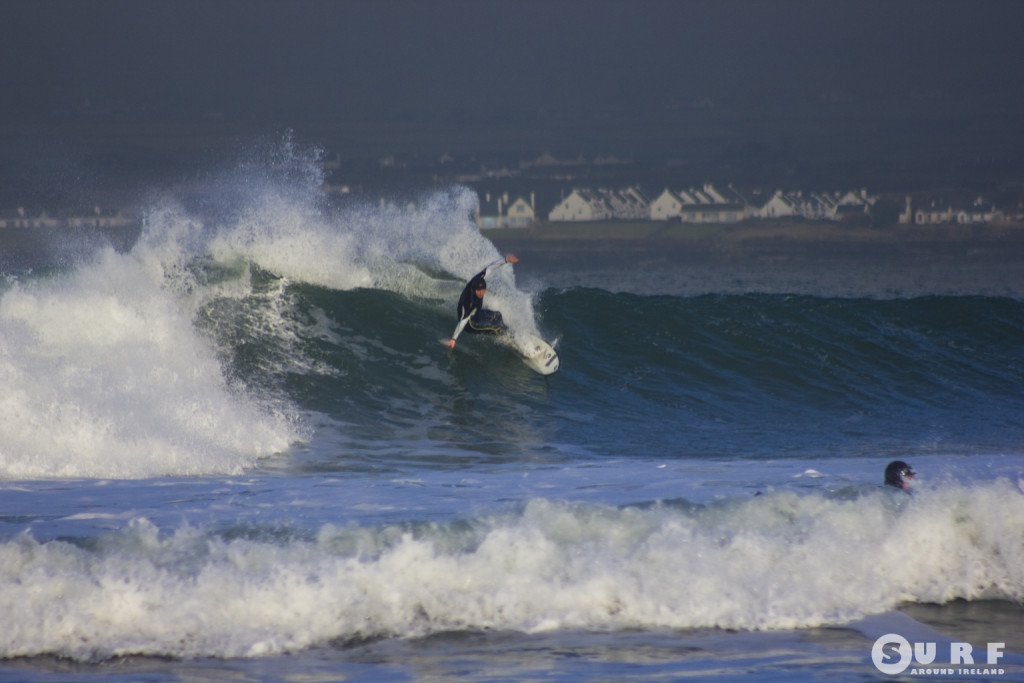 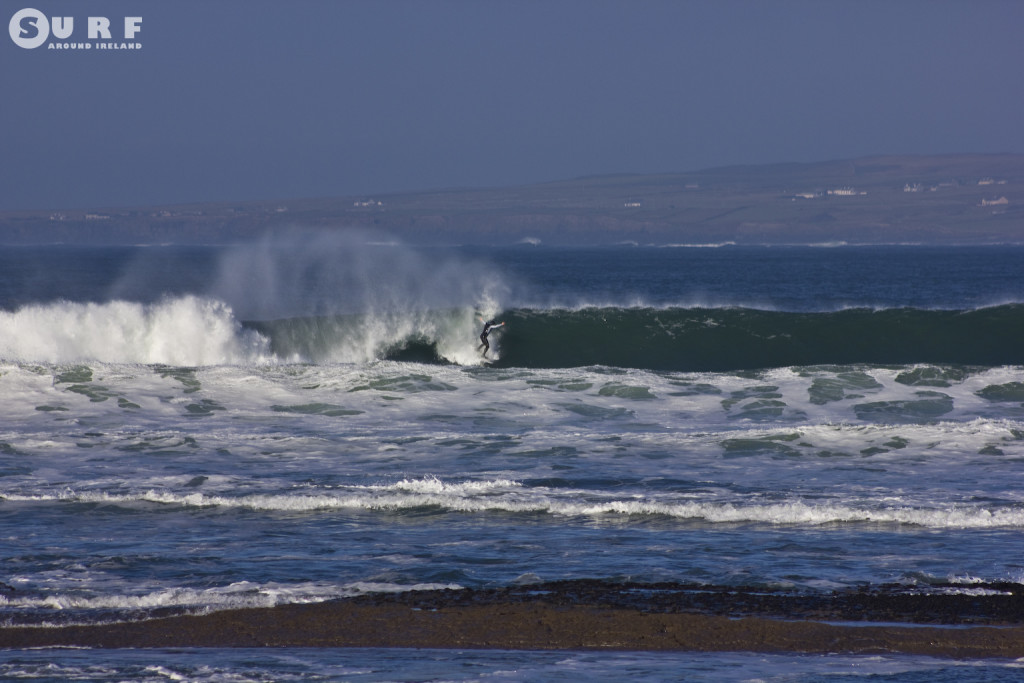 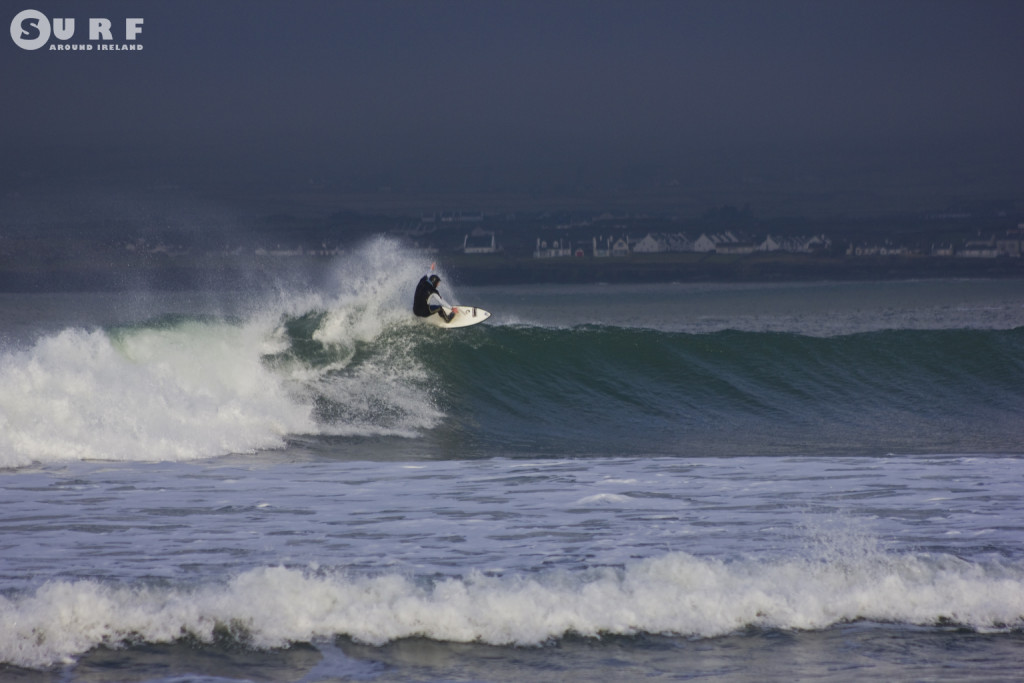 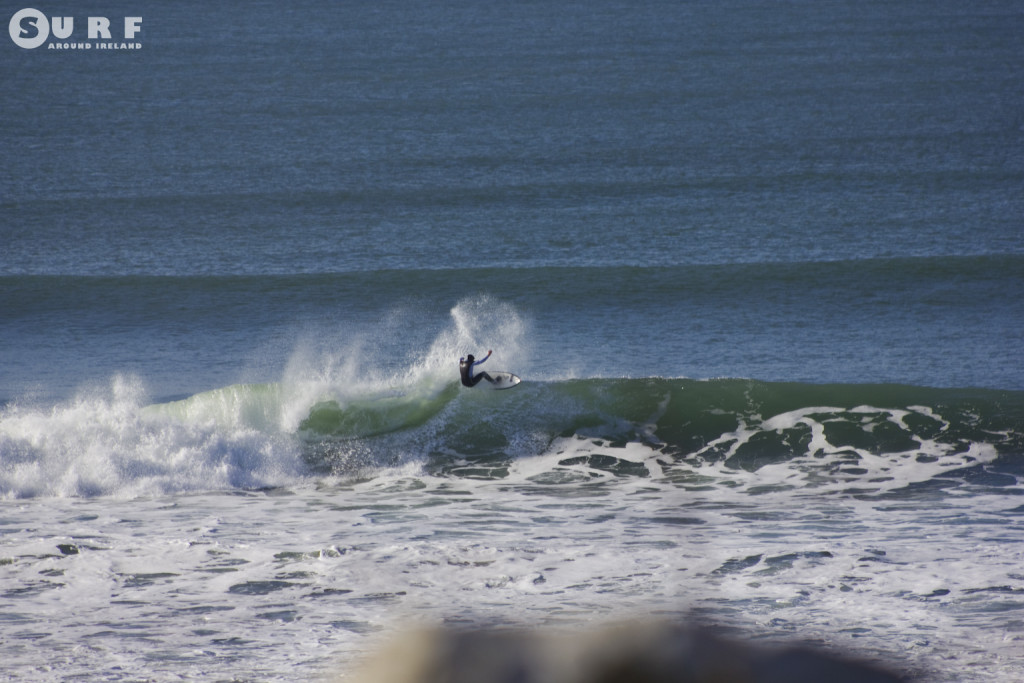 Interview with ‘The Fla’ 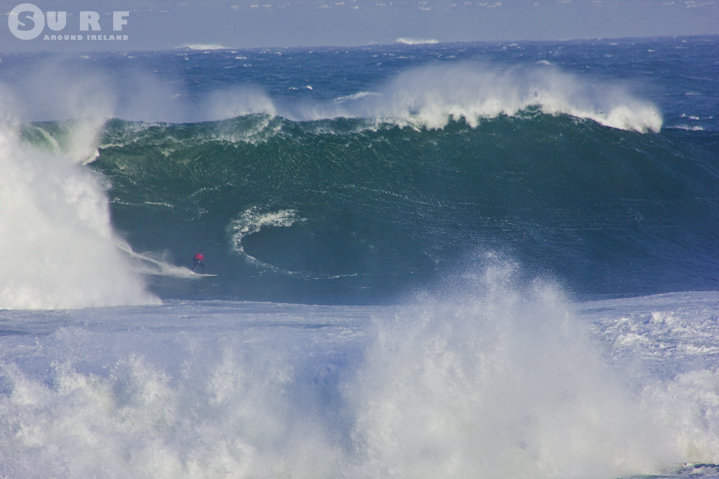 What goes through your mind when you are being towed into a monster wave?
Lots of stuff goes through my mind in the lead up to whipping into really big waves but to be honest once I let go it’s more instinct and I calm right down and just negotiate whatever the wave throws at me and enjoy the ride !!!

We recently saw a video of you wiping out in a massive Mullaghmore barrel? Is that your worst wipeout? Is there ever days that you say, right, that’s it, I’m packing in the big wave stuff?
Ya I recently had a pretty giant tube that Conor Maguire whipped me into. That was the best day I have ever seen out there so I wanted to push the limits and just get a super deep giant barrel. It was one of my most violent wipeouts for sure, I had real problems with my sinuses for a week after with headaches and stuff , during the wipeout I must have done 20 tumble turns before it let me come up. There are times where I think will this be my last winter but I know it won’t be. I’m addicted and will keep this going as long as my body lets me

You’re well known for your expeditions on the big wave circuit in Ireland, today we see you surfing human sized waves with your mates, having the best craic! Is there a favourite or can you even compare the two?
You can’t compare the two. Almost two different sports , big wave surfing is much more commitment and mentally draining. Regular performance based or just cruising is like therapy to me at times. I love my home and the waves and especially with my close friends. Deep winter when it’s not crowded at all and just your mates out is soul enriching stuff. Love it just as much as big wave surfing, but nothing beats a 20ft bomb at mully!!!

Big wave surfing in Ireland is all about last minute windows to catch the perfect conditions. Is it difficult to get away with work commitments?
I’m very lucky with work as I do about 4 or 5 months of coaching and then I go flat out surfing for the winter season. With the help of my sponsors it keeps me ticking over just about 🙂

How important IS sponsorship to you as a surfer and what brands are supporting you at the moment?
Sponsors are huge for me and I would not be able to do it otherwise . My sponsors for the last few seasons were C-Skins Wetsuits, Globe, Creatures of Leisure, Monster, Coded Surfboards and Sexwax.

You said you were testing out a new board today? What board was it? Give us an idea of what boards you are currently riding?
My boards are shaped by Coded Surfboards, shaper Sean Nicholas. The guy is the most exciting and innovative shaper in Ireland hands down and great to work with! I normally surf a standard shortboard 5’8x19x21/4 but today I was trying a 5’10 step up board for 6ft surf!

Whats your daily training routine?
My routine in summer would be more intense with lots of beach running and circuits but in winter I step that back. I concentrate on my yoga almost everyday and then I try to do 4 surfs a week and 2 training sessions is more than enough. I use big onshore days as training too. I try to not party for most of the winter maybe a couple of nights at most and eat well.

Apart from surfing, what do you do to relax?
I love my yoga. It releases so much stress and really makes me appreciate what I have and live my life day by day and not take it too seriously. I needed it because I was too hard on myself and was too highly strung. I Let everything affect me. I’m learning all the time, it’s epic!

What are your thoughts on the progression and popularity of surfing in Ireland in the last 10 or so years? Particularly in your local area of Lahinch?
I think the boom in surfing is awesome. It pushes the standard and puts Ireland on the map for the right reasons. Lahinch has done very well and it creates jobs and also enables companies to sponsor the likes of myself.

Is there always respect for locals or is there a small sense of chaos creeping in on the good days?
I think the only problem with surfing growing is an ignorance and lack of respect for the ocean and other surfers. We’re still an emerging surf nation who is 10 to 15 years behind the rest of the world. What we do not have is a built in knowledge of the line ups. Too many people just go hell for leather and don’t get that it’s not a free for all. The ocean is free but it’s vital to respect the local surfers and guys who put in many years at certain breaks. Surfers by nature are selfish but that doesn’t mean we paddle out at surf spots and immediately paddle inside locals. It doesn’t happen in oz or the states , anywhere I have traveled on my many trips. I totally respect the locals and wait until it’s my turn. I even do it traveling to Bundoran and it’s only 3 hours away but I’m not a full local there so I respect the guys who are. Doesn’t happen here in Clare. But I’m Hoping it will change!

You are heavily involved in your local surf club (WCSC) and with the coaching of the local groms in Lahinch. Without upsetting all your friends is there any real stand out surfers progressing through the youth ranks in Lahinch?
I mean the obvious choice is Dylan Noonan. At 16 he is winning every contest he enters and has a great style. But behind him there is a great crop of young guys like Cunall Haugh, Tadgh Kennedy, Dara Flynn, Ross Coyne , Brendan Monagahan. The best girl around is Kia Philips she is the most committed surfer around Clare and she surfs rain hail or snow and the biggest improver this last winter was Brendan Monaghan, he could do well in the big wave scene he has the physicality and desire it’s great to see.

What does the future hold for you Ollie? Have you any career goals or have you ever considered becoming Pro?
Future for me is pretty much the same. Push the limits and see where it goes. I hopefully will get more involved with coaching in the next few years with the club and a in few other ways.

One More Question, Who was that hunky longboarder who joined you in the line-up today? 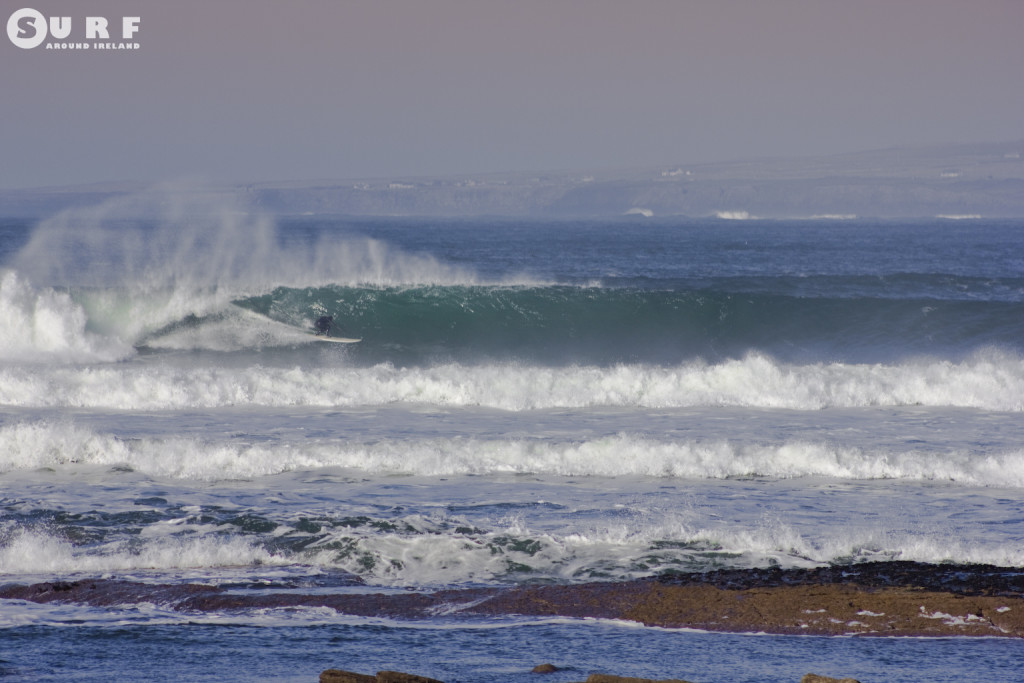 That Hunky longboarder is Stephen Kelleher aka “Kelly”, One of the best Longboarders around! 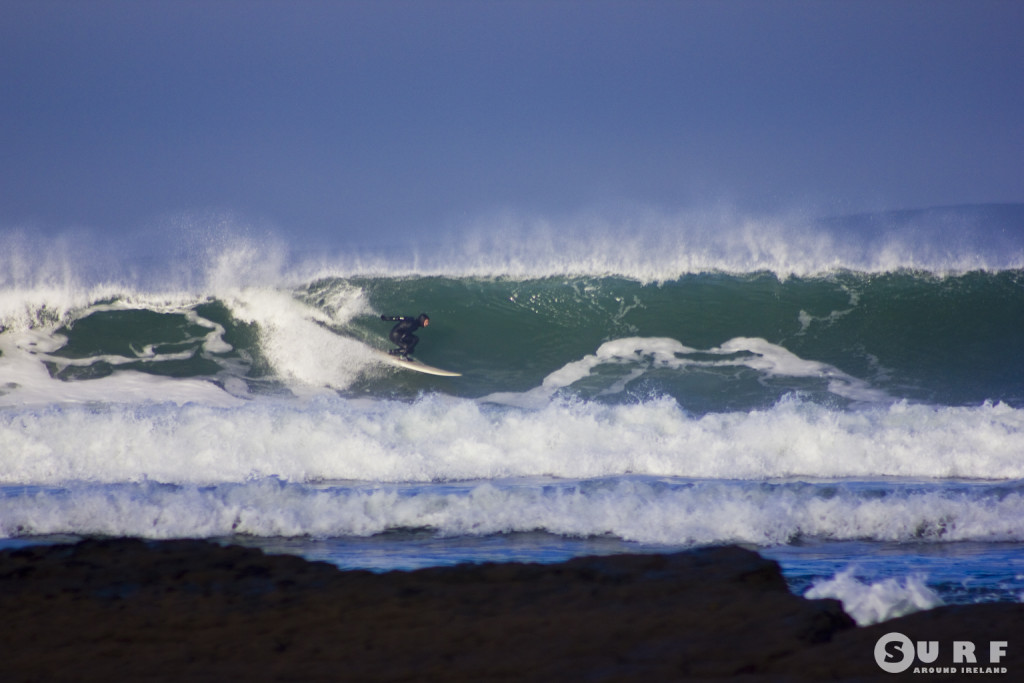 That Hunky longboarder is Stephen Kelleher aka “Kelly”, One of the best Longboarders around!

All shots taken by Colin Cooney (Surf Around Ireland). I discovered the day before the shoot that my lens was dodgy but I’m happy I  managed to keep it together to get some decent shots. This is the first in a series on meet the locals. If you feel you’d like to be featured, get in touch and we can arrange a shoot (with our new lens!). You don’t need to be a big wave charger like Ollie but if you can hold your own in solid surf then drop us an email!