We’ve had plenty of high profile visitors surfing this spot during the year, from Mick Fanning to Ryan Hipwood and it was “just to cold” for visiting hellmen Jamie O’ Brien and Poopies. It’s deep winter now and only a select few are tackling cold waves of this magnitude. It always comes back to the local chargers who are prepared and ever ready when this giant awakens. You’re never 100% sure if it will be suitable for a paddle surf but regular chargers Ollie O’ Flaherty and Mark Kileen were first out in the line-up to give it a go. Chatting to Ollie before hand he said “we’ll give it a shot and if its not happening we’ll tow a few when the lads arrive with the skis”. The duo tried their best to bag a few paddle waves but it was clear the waves were just too big to paddle.

The rest of the lads, including Peter Conroy, Seamus O Riain and Fionan Cronin, joined the line-up with a couple of skis. Taking turns towing, it didn’t take them long to bag a few giant rides and in Peter Conroy’s case one of his worst ever wipeouts at this spot. 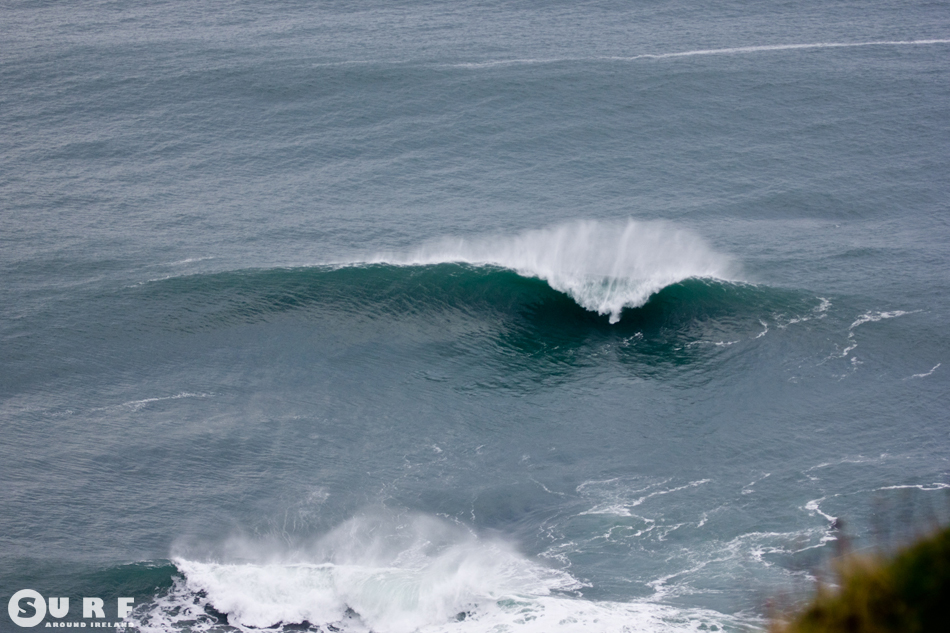 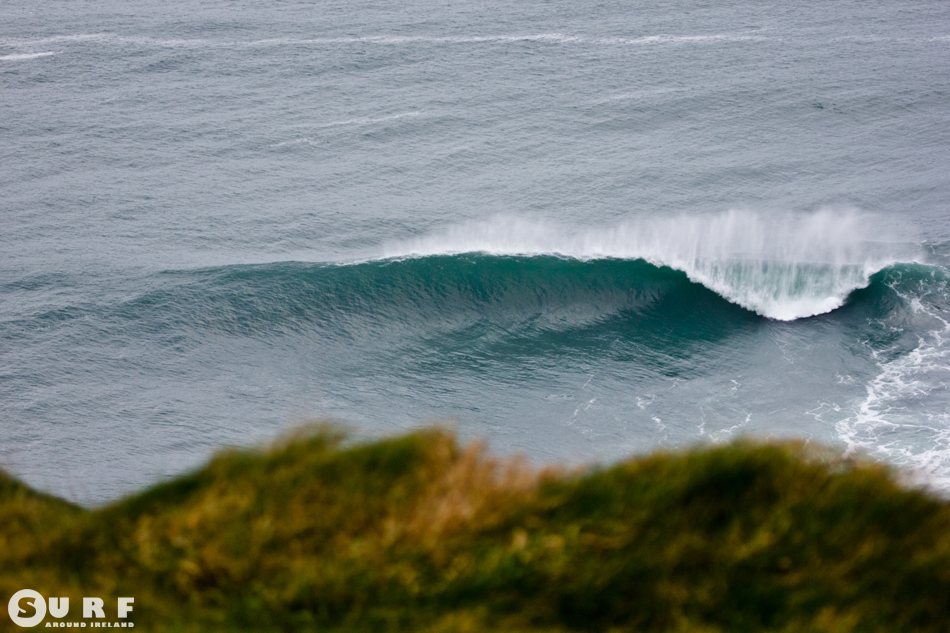 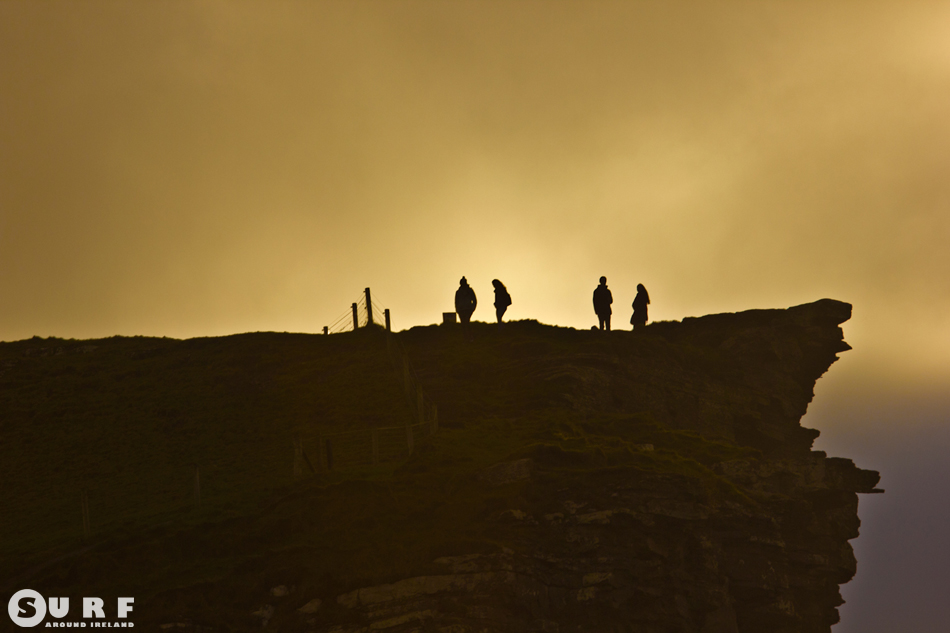 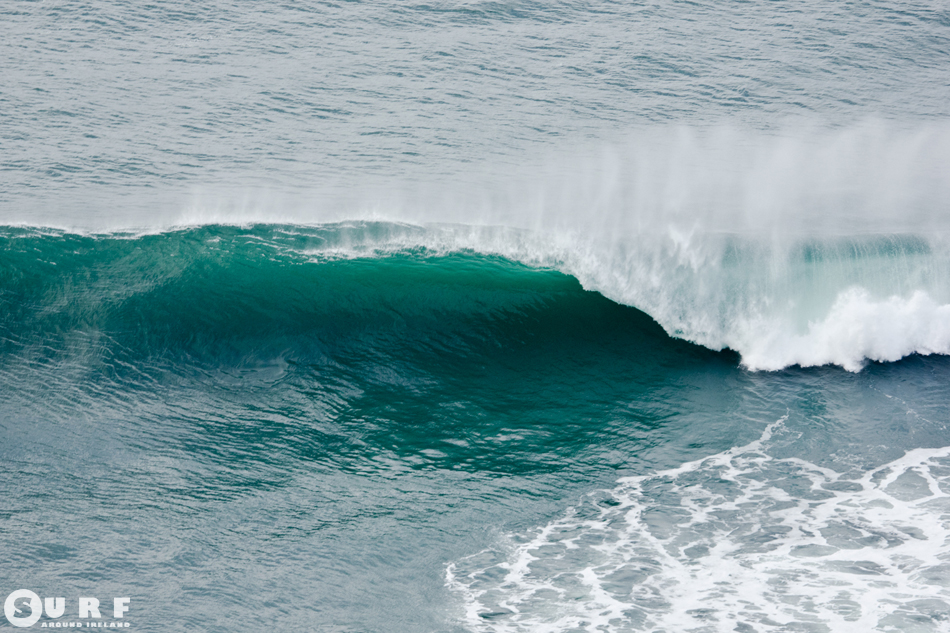 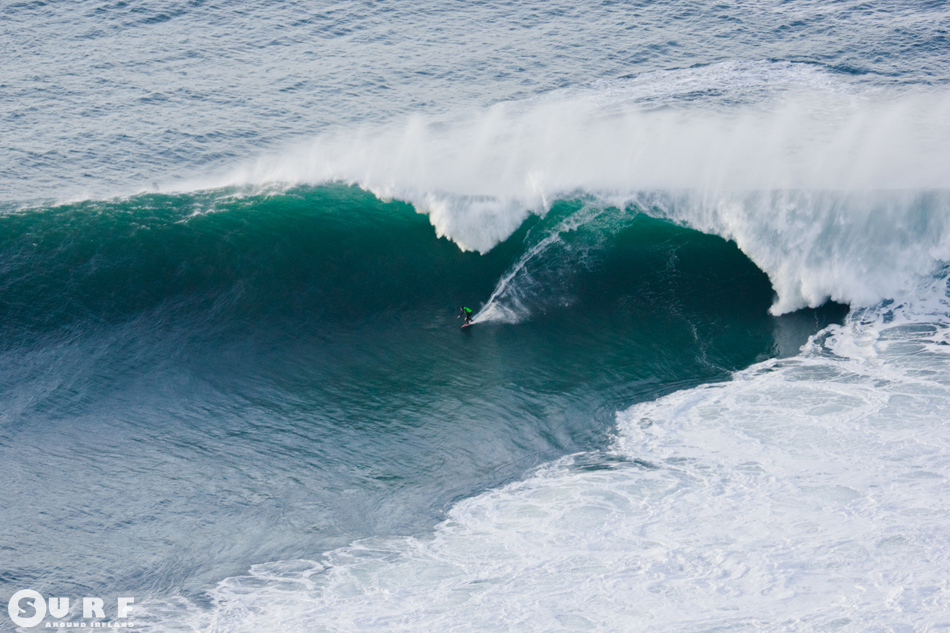 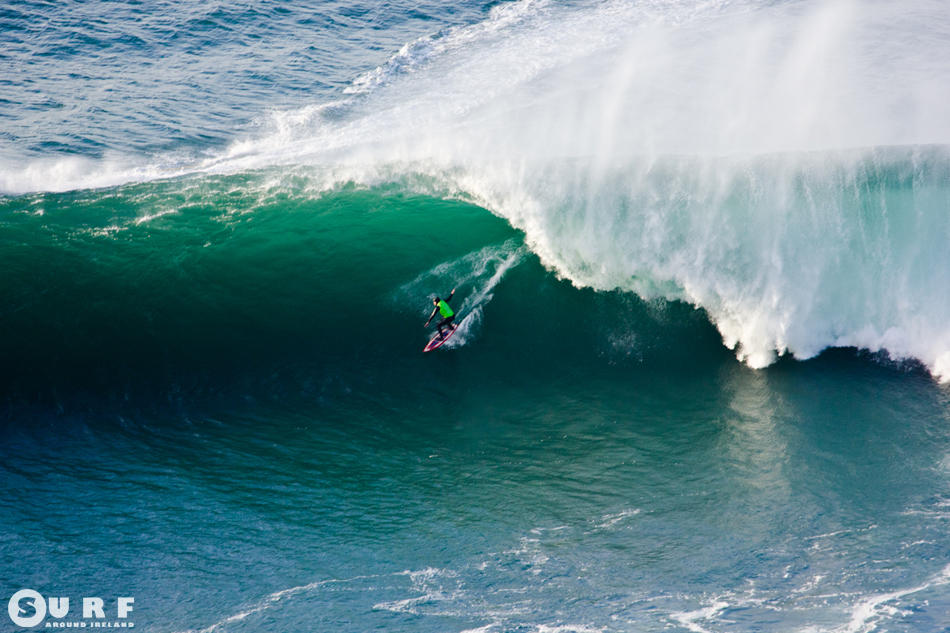 “It was a beautiful winters day, a big change from our last tow session in Mully a few weeks previous. I was pumped to tow a right for a change!! I think I got four waves in total, that was plenty. All in all it was a good day of surf with good friends and I was glad I was there to pick Peter up after his massive wipeout” 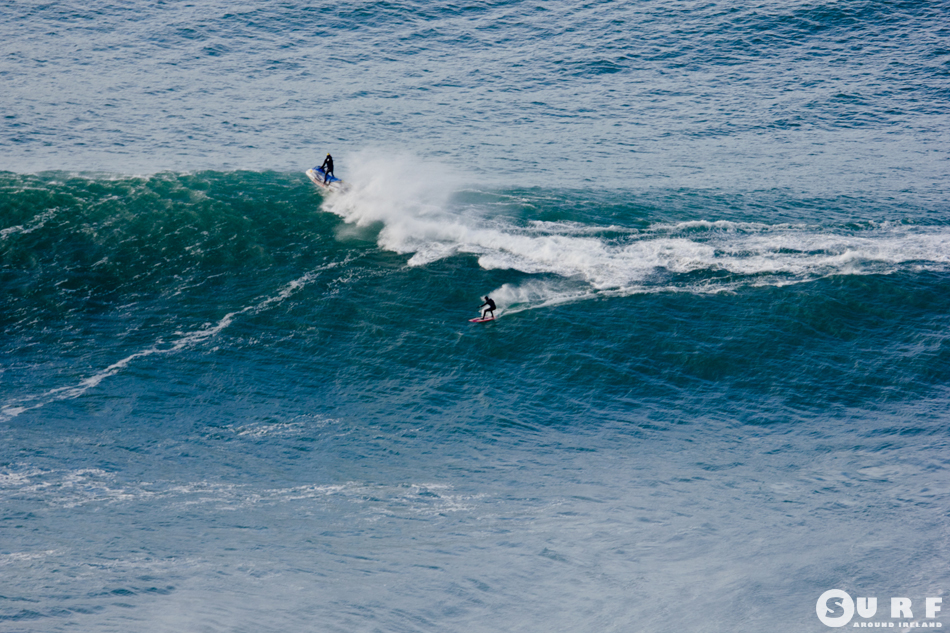 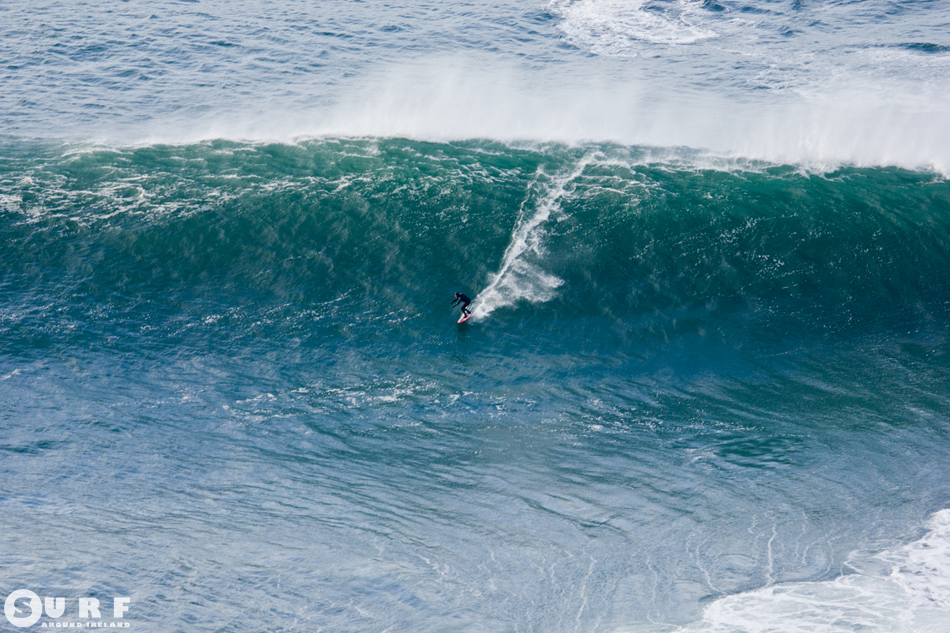 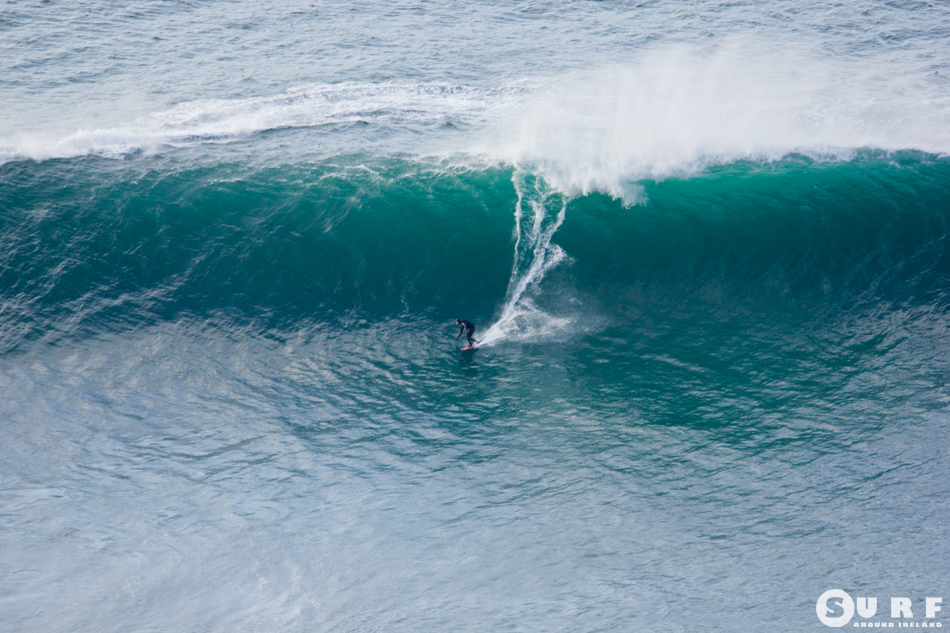 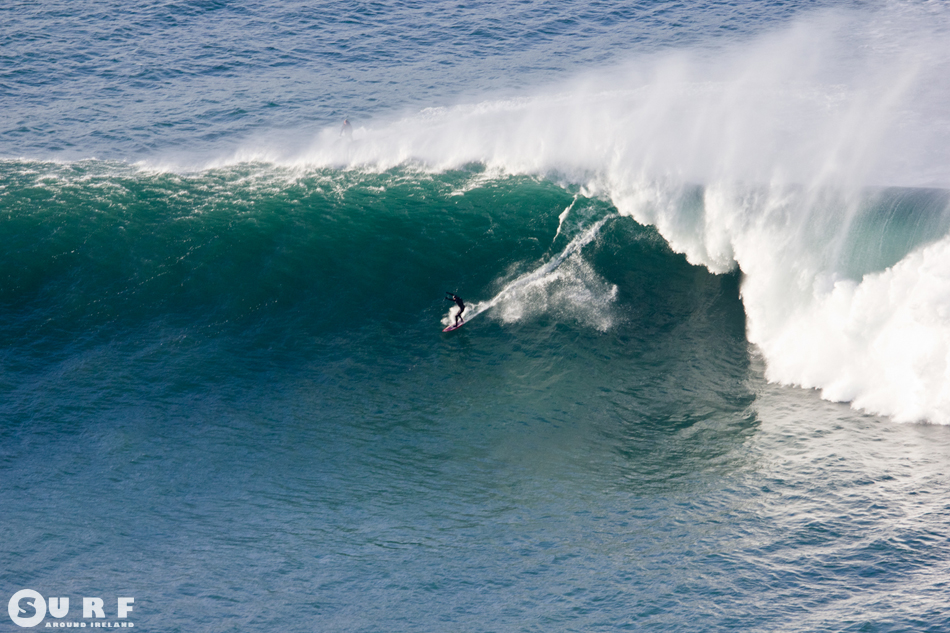 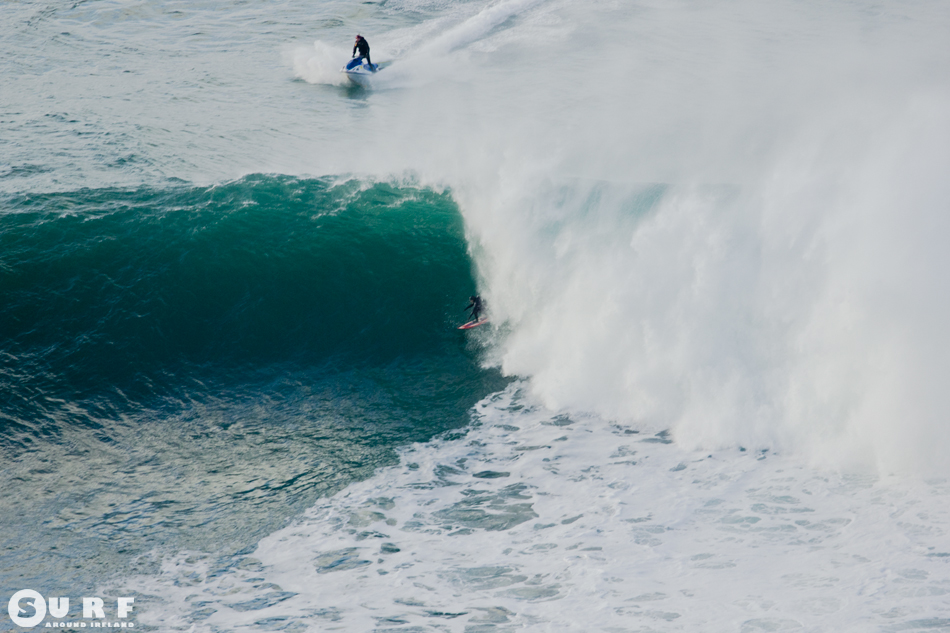 “Paddling around at Aileen’s at that size was really intimidating. A 15 to 20ft face out there is as powerful as a 40ft face somewhere else. It’s real raw power. Me and Mark paddled out to see if we could sneak one off the boil but after nearly getting caught a few times it was nice to see Peter, Seamus, Fionan and Clem coming on the skis !! The thing about Aileens is you’re really looking for the 10ft in-between waves, as the biggest ones nearly always shut down at this size. Also on the way back in, when it’s that size, its is not a nice experience. The shore dump on this occasion nearly ate me but I managed to get up the rocks /boulders safely”. 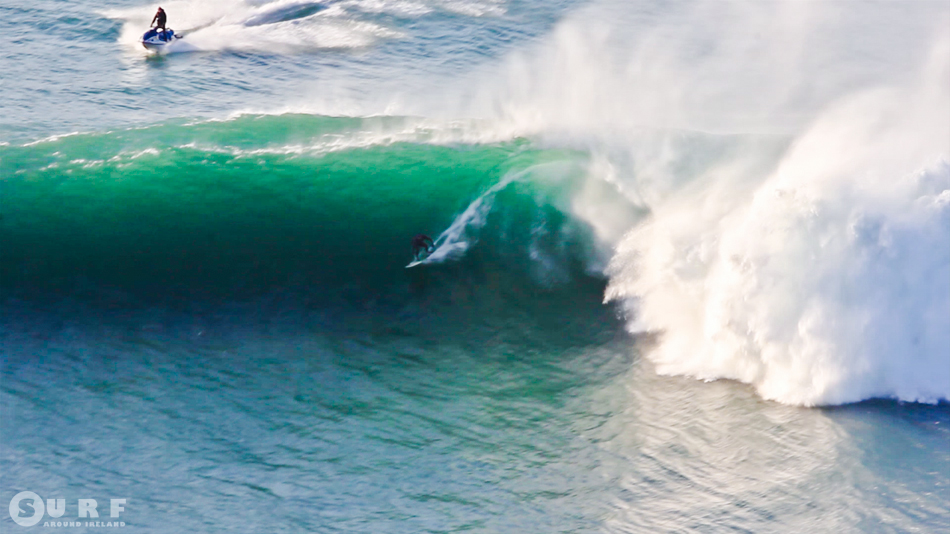 “I have always paddled Aileens, I just missed the few years they towed there so I have only known it as a place to paddle. It was interesting to get on the rope and I think certain days whipping in might have it’s place for sure but for me it’s the perfect paddle slab. Even if it’s on my backhand I get the most satisfaction making one paddling. In saying this it felt nice to be into one early, with no drop!!! Also a big shout out to Peter Conroy who is always there to keep us safe . The guy is a guru of ski safety simple as that. And it was sick to see Fionan and Seamus whip into a few sick pits. Those boys charge and don’t get enough kudos. Up the banner…”

“It really was a very fun session and it was great to get a few tows there. The swell was a bit all over the place with big wide ones coming in every 15 min. or so. Trying to choose the right one was hard, as the best ones were the smaller ones.” 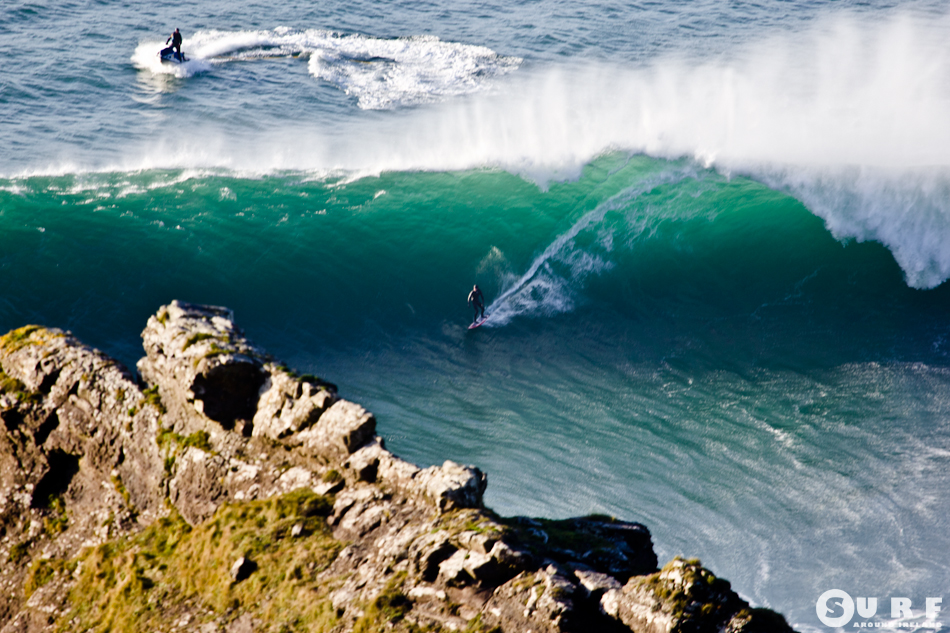 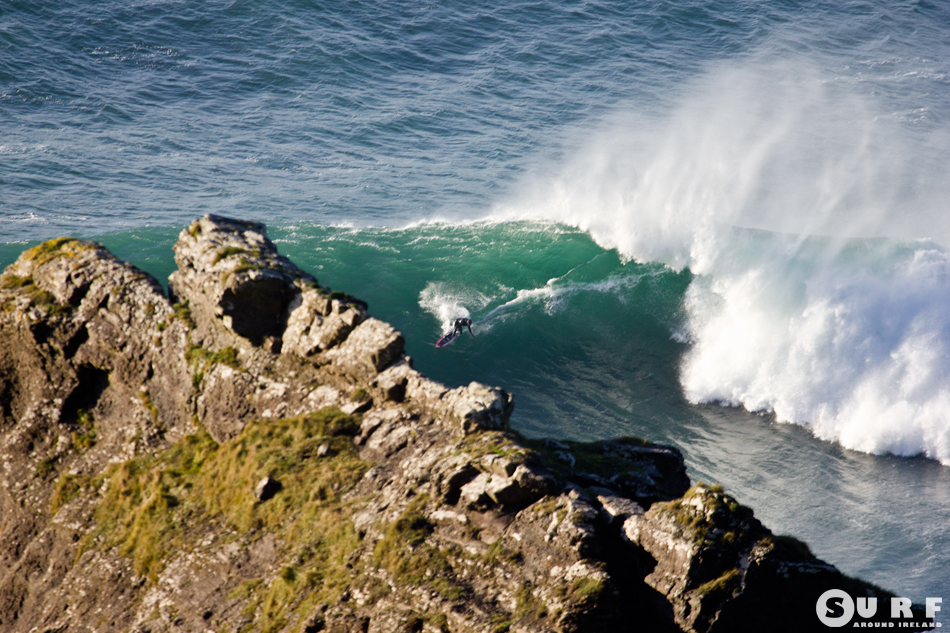 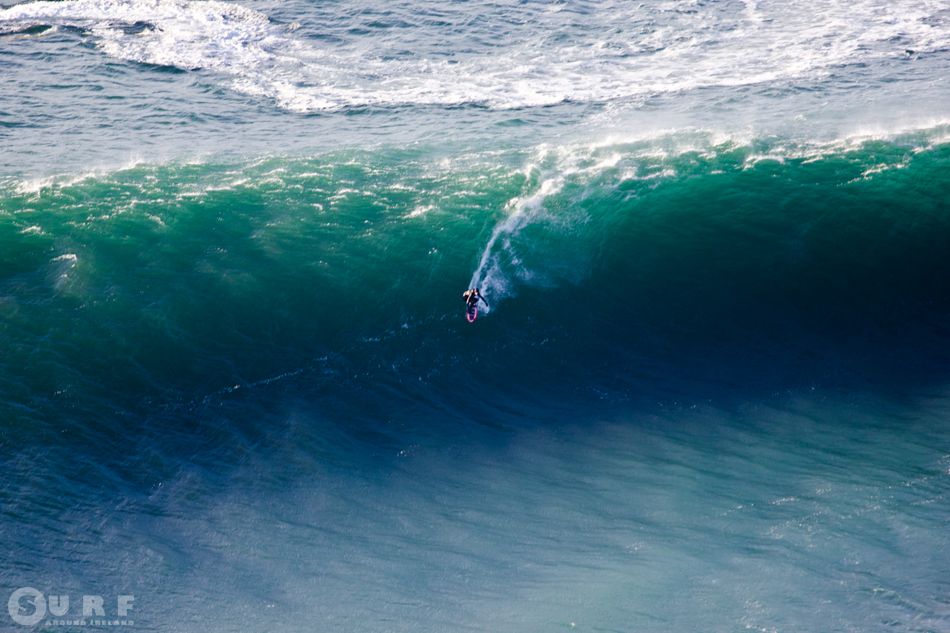 “I remember going really fast to try and stay on the wave and just as I thought I had it my board hit a big lump in the water and stopped suddenly. This would have been OK if we had straps in the board but we only had my slab board and had taken the straps off. So the board stopped suddenly and I went over the handle bars.” 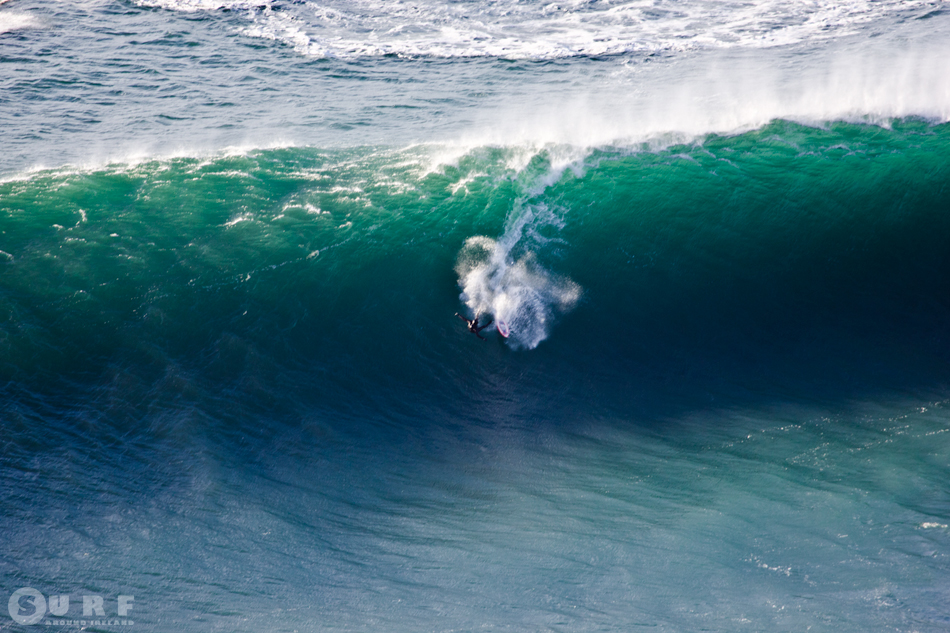 “Looking up at the lip I was thinking, this ain’t gonna end well and giggled just as I hit the water and got winded.” 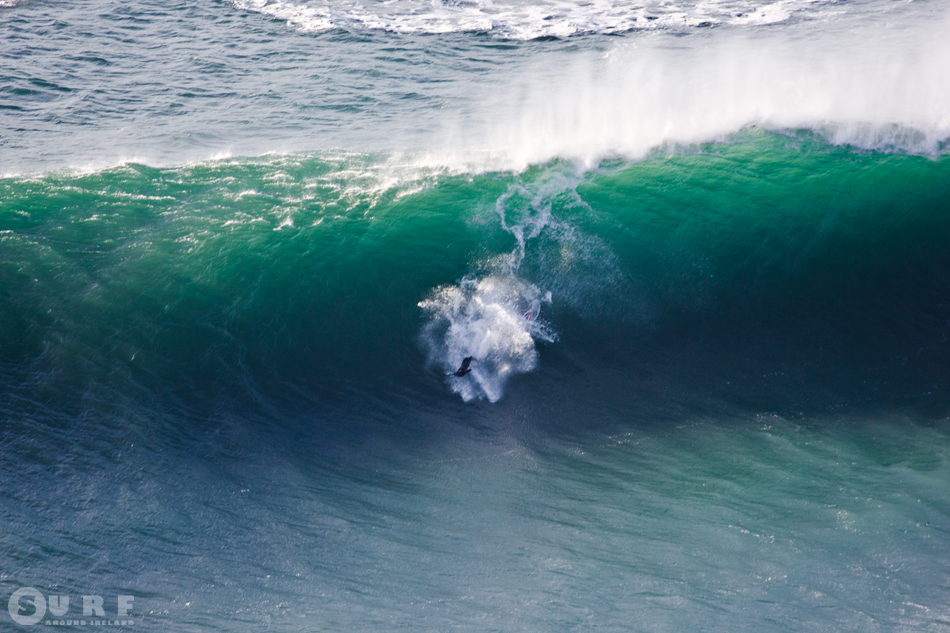 “While trying to turn myself as I skimmed down the face I knew I had to try swim down and hopefully not get sucked over.” 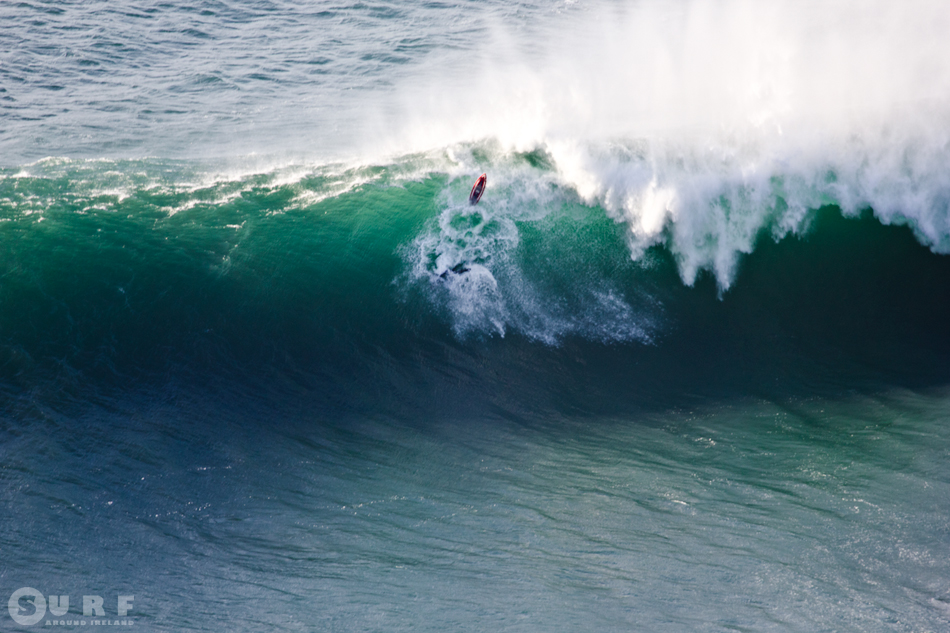 “Because I had an impact vest on I couldn’t get under much and proceeded to get sucked over.” 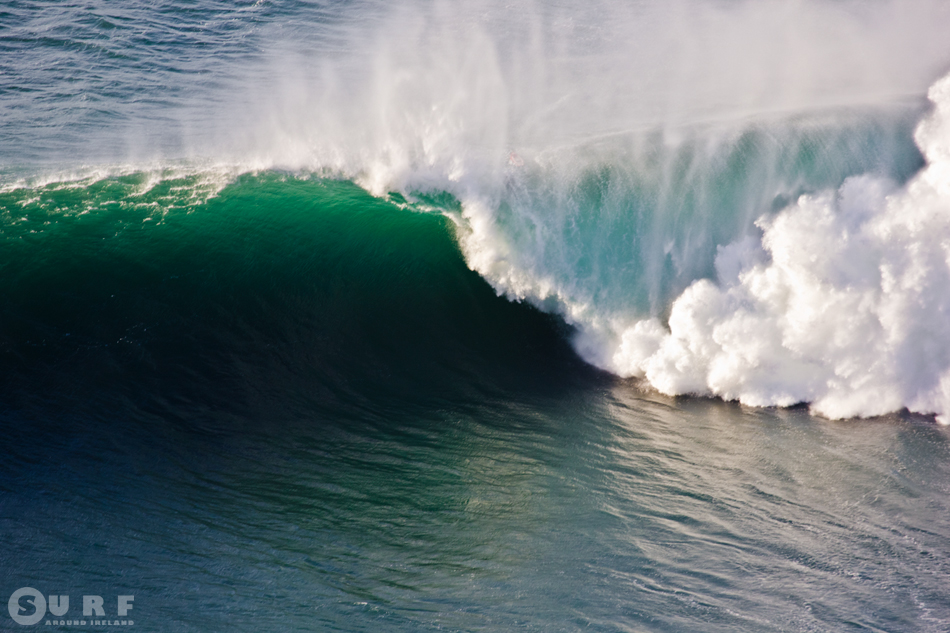 “I felt the free fall as I fell the 15-20ft in the lip and got smashed. I was under for what felt like ages. I even felt the gagging urge to breath and had to go deep into my happy place. I had only surfaced a few seconds when the next wave hit, but once I was up I knew I was OK, well apart from my glove getting ripped off my hand. Fionan came in and picked me up and the the whole ordeal of getting my good board back started….but that’s another story haha..”

“In terms of water safety practice, it was a great day to tow. The pick ups afterwards needed to be quick and efficient as we only had a few seconds to get the guys out of the impact zone.  THE IRISH TOW SURF RESCUE CLUB is now open again for membership from the first of January 2017. This membership helps with all the gear and fuel for training and safety. We had approx. 42 members last year, which was amazing. Hopefully we can grow the membership this coming year. We will be starting training soon and we now have a club ski to practice on.”….Peter Conroy

More Empty Beauties From the Day 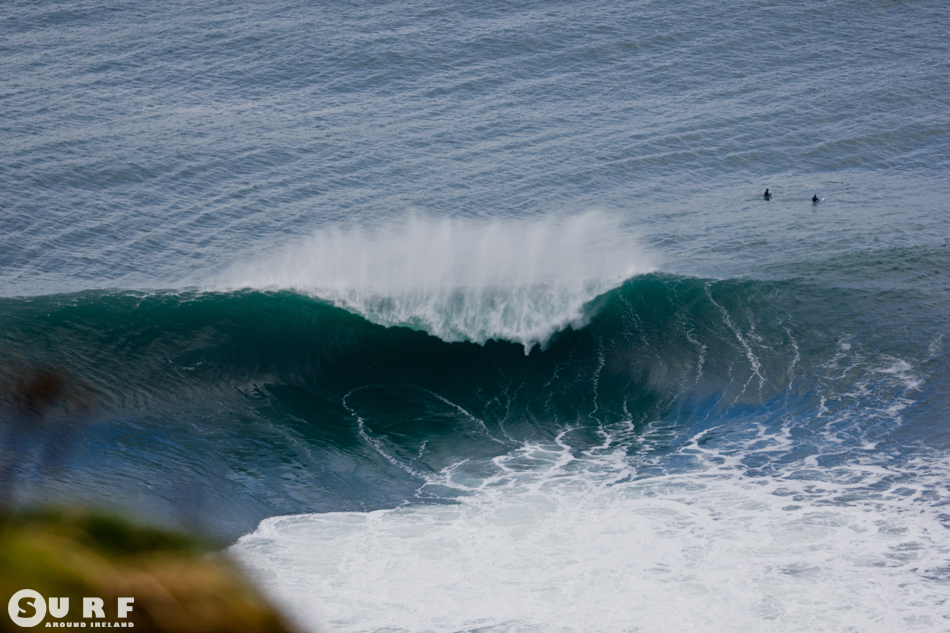 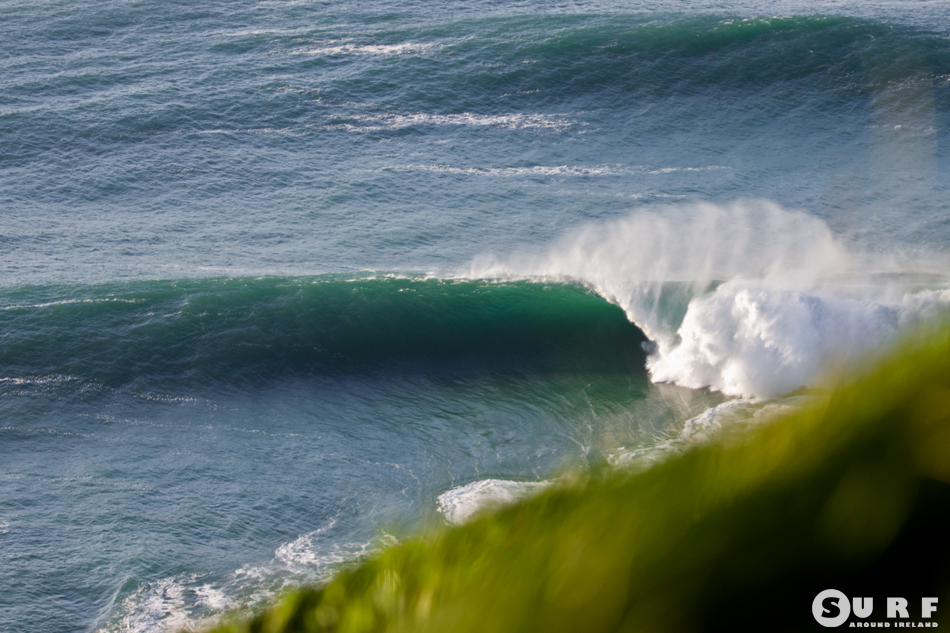 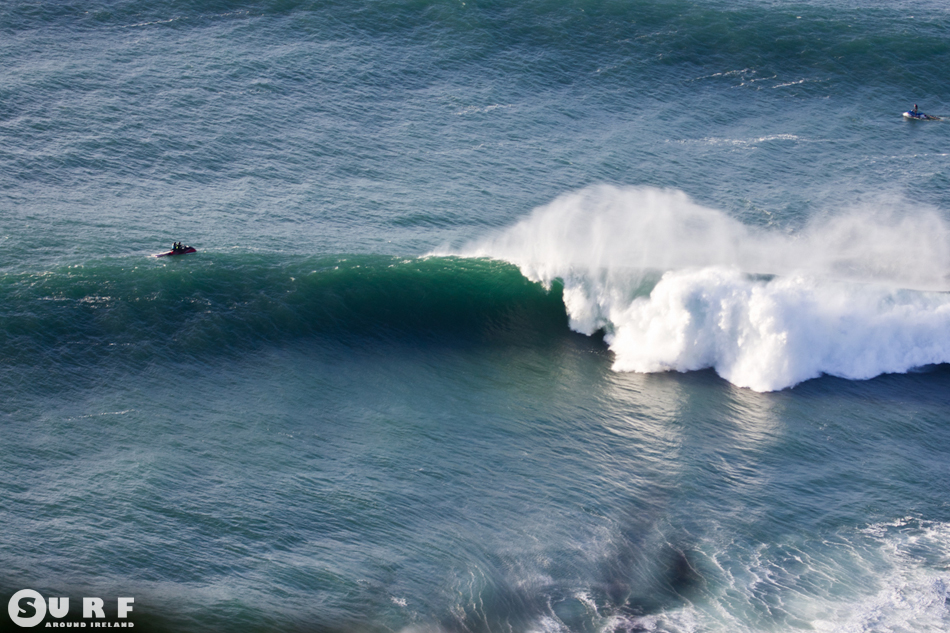 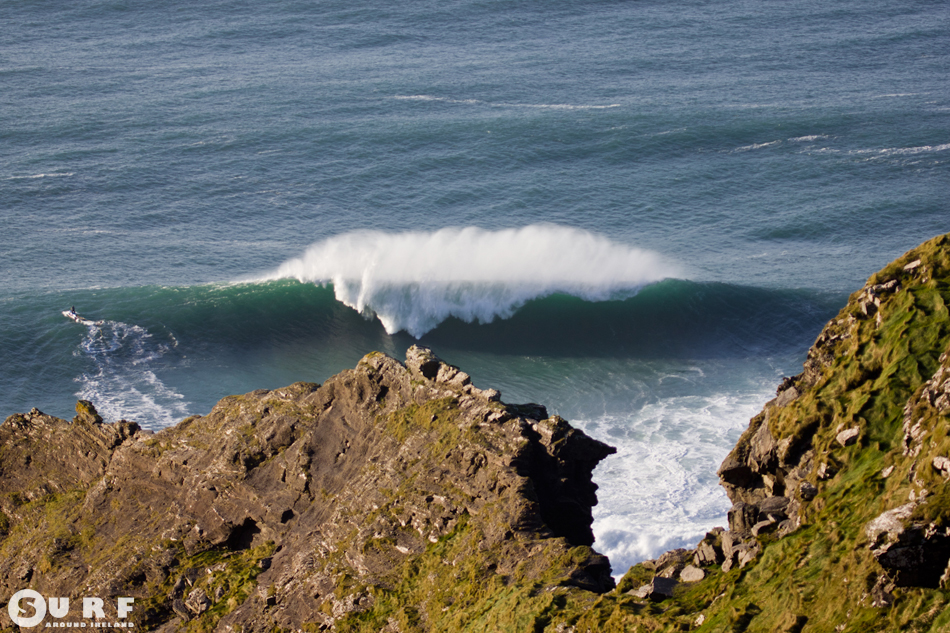